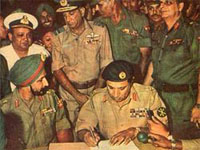 Between 1905 and 1911, an abortive attempt was made to divide the province of Bengal into two zones, with Dhaka being the capital of the eastern zone. When the exit of the British Empire in 1947, Bengal was partitioned along religious lines, with the western part going to newly created India and the eastern part (Muslim majority) joining Pakistan as a province called East Bengal (later renamed East Pakistan), with its capital at Dhaka. In 1950, land reform was accomplished in East Bengal with the abolishment of the feudal zamindari system. Despite the economic and demographic weight of the east, however, Pakistan’s government and military were largely dominated by the upper classes from the west. The Bengali Language Movement of 1952 was the first sign of friction between the two wings of Pakistan. Dissatisfaction with the central government over economic and cultural issues continued to rise through the next decade, during which the Awami League emerged as the political voice of the Bengali-speaking population. It agitated for autonomy in the 1960s, and in 1966, its president, Sheikh Mujibur Rahman (Mujib), was jailed; he was released in 1969 after an unprecedented popular uprising. In 1970, a massive cyclone devastated the coast of East Pakistan, killing up to half a million people, and the central government responded poorly. The Bengali population’s anger was compounded when Sheikh Mujibur Rahman, whose Awami League won a majority in Parliament in the 1970 elections, was blocked from taking office.

After staging compromise talks with Mujib, President Yahya Khan and military officials launched Operation Searchlight, a sustained military assault on East Pakistan and arrested him in the early hours of 26 March 1971. Yahya’s methods were extremely bloody, and the violence of the war resulted in many civilian deaths. Chief targets included intellectuals and Hindus, and about one million refugees fled to neighbouring India. Estimates of those massacred throughout the war range from thirty thousand to 3,000,000. Mujibur Rahman was ultimately released on 8 January 1972, due to direct US intervention.

Awami League leaders set up a government-in-exile in Calcutta, India. The exile government formally took oath at Meherpur, in Kustia district of East Pakistan on 17 April 1971, with Tajuddin Ahmad as the first Prime Minister and Syed Nazrul Islam as the Acting President.

The Bangladesh Liberation War lasted for nine months. The Bangladesh Forces formed within 11 sectors led by General M.A.G. Osmani consisting of Bengali Regular forces conducted a massive guerilla war against the Pakistan Forces with support from the Mukti Bahinis consisting of Kaderia Bahni, Hemayet Bahini, and others financed and equipped by Indian Armed Forces Maj. Gen. Sujat Singh Uban. Indian Army swooped in with the help of the BDF forces and negotiated a cease-fire and surrounded the Dhaka Area. The Indian Army remained in Bangladesh until 19 March 1972.

After its independence, Bangladesh was governed by a Awami League government, with Mujib as the Prime Minister, without holding any elections. In the 1973 parliamentary elections, the Awami League gained an absolute majority. A nationwide famine occurred during 1973 and 1974, and in early 1975, Mujib initiated a one-party socialist rule with his newly formed BAKSAL. On 15 August 1975, Mujib and most of his family members were assassinated by mid-level military officers. Vice President Khandaker Mushtaq Ahmed was sworn in as President with most of Mujib’s cabinet intact. Two Army uprisings on 3 November and the other on 7 November 1975 led to the reorganised structure of power. Emergency was declared to restore order and calm, Mushtaq resigned and the country was placed under temporary martial law, with three service chiefs serving as deputies to the new president Justice Abu Satem, who also became the Chief Martial Law Administrator. Lieutenant General Ziaur Rahman, took over the presidency in 1977 as Justice Sayem resigned. President Zia reinstated multi-party politics, introduced free markets, and founded the Bangladesh Nationalist Party (BNP). Zia’s rule ended when he was assassinated by elements of the military in 1981.

Bangladesh’s next major ruler was Lieutenant General Hossain Mohammad Ershad, who gained power in a coup on 24 March 1982, and ruled until 6 December 1990, when he was forced to resign after a revolt of all major political parties and the public, along with pressure from western donors (which was a major shift in international policy after the fall of the Soviet Union). Since then, Bangladesh has reverted to a parliamentary democracy. Zia’s widow, Khaleda Zia, led the Bangladesh Nationalist Party to parliamentary victory at the general election in 1991, and became the first female Prime Minister in Bangladeshi history. However, the Awami League, headed by Sheikh Hasina, one of Mujib’s surviving daughters, won the next election in 1996. It lost again to the Bangladesh Nationalist Party in 2001.